So much has happened at Riverdale Park East since I last posted over 6 years ago. The site has seen so many changes that it's almost unrecognizable. First of all, we now have a new wetland right in the front of the site and extending in the park itself where there used to be only a lawn. 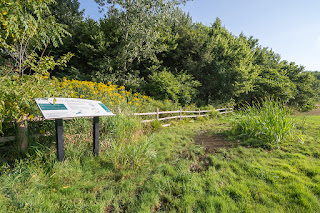 The fence around the site was also extended to include the new area and protect the wetland. 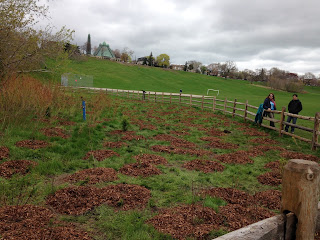 Over the last couple of years, a lot of plantings have taken place and it's growing fast. We moved the toolbox further in the forest and got a brand new metal box too, much better than the old wooden one that was really falling apart. 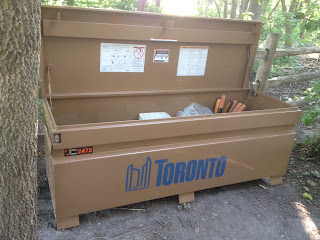 The site itself like many others in the city contains a lot of ash trees which were infested by the emerald ash borer. Most of the trees were taken down 2 years ago because they were all dying and were deemed a hazard. As a result, where we used to have a forest, the site is much more open now which is not a bad thing because we can see a lot more vegetation now that simply couldn't grow before as it was too dark.It's actually nice to see more flowering plants now thriving with a lot more sunlight. 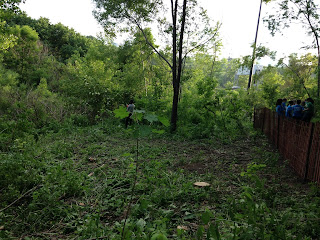 While the team is still very busy with the site proper and the rest of the forest with all the usual invasives to remove, we also started tackling the phragmites patch located in the middle of Riverdale Park on the east slope. We started using a different spading method developed by a professor at Humber College. It's very labour intensive and must be done over several summers in order to see some results. After 3 summers, we start to see improvements. There has also been lots of planting in order to try to outcompete the Phragmites. 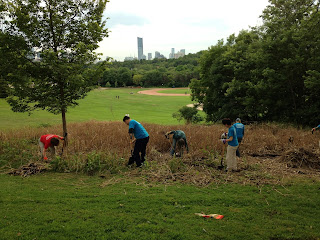 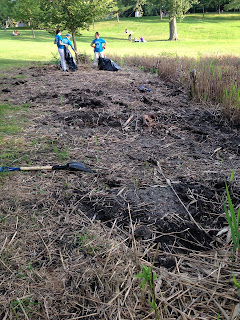 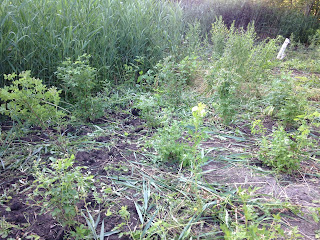 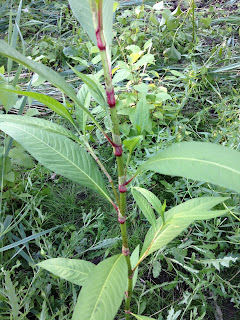 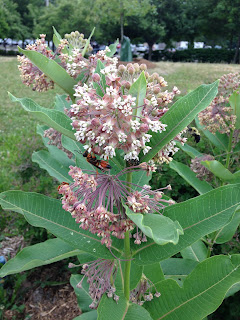 The phragmites patch was also the subject of a research study by members of EcoSpark,

an environmental charity connecting people to their local natural environment through education, monitoring and stewardship.

The research involved taking samples and measurements of the area to further study the plant. The research took place over 2 years. 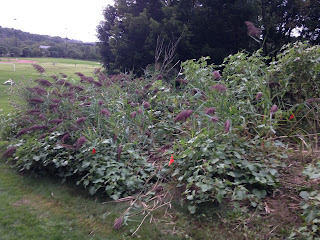 Unfortunately, with the pandemic since last year, we haven't been able to do much stewardship work. We were able to go on site last year for a few weeks and did what we could in this short period. As for this year, there is still a lot of uncertainty and we'll have to see if and when we can resume our work. 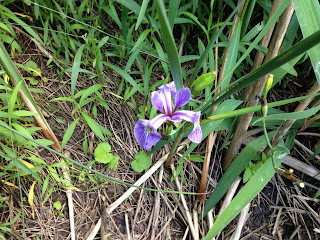 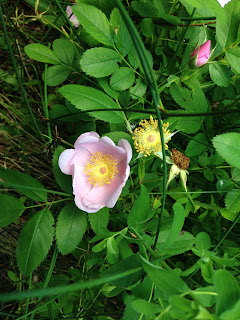 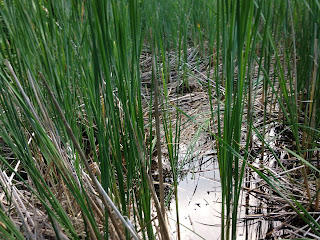 We have seen a lot of rain so far this summer and we have had at least three outings when we got completely soaked.  We had to stop early a couple of times because the soil becomes too muddy and by trampling it, we actually do more damage than good. However, we did some plantings and it was a lot easier to dig and the plants are looking very good. We planted chokecherry, sugar maple, witch hazel and dogwood.

We also started to work in the forest behind the site and we removed quite a bit of buckthorn and Manitoba Maple.

The garlic mustard and DSV are, of course, rampant as usual but we have managed to keep it off the fenced area.  By removing it all along the outside area of the forest, we can control it better.

The wet weather and the cooler temperature also means that there is more water in the pond and it looks pretty good.  Usually, by this time of the year, it would be all dried up.
Last week, we also saw a pretty white moth in the forest. 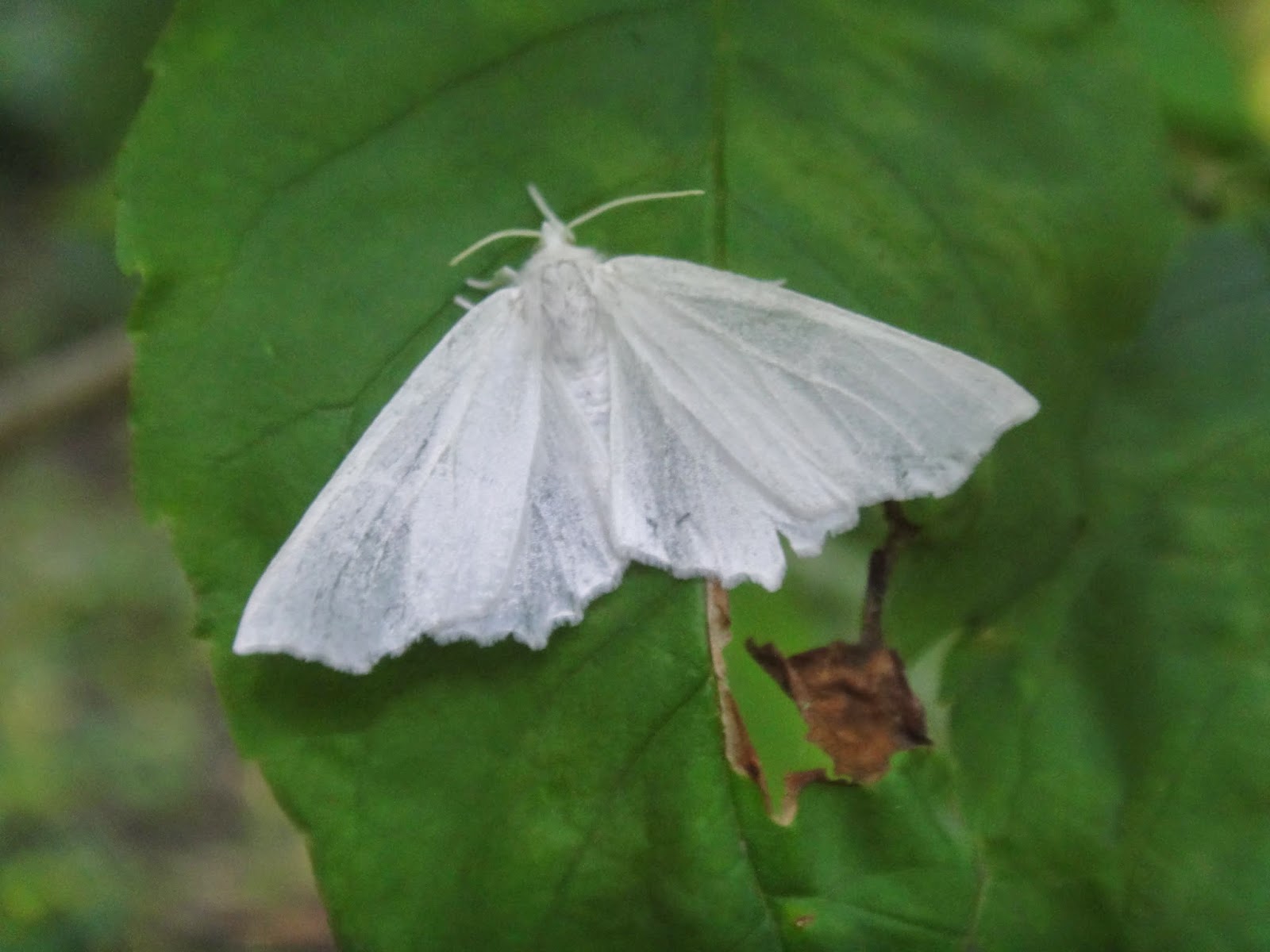 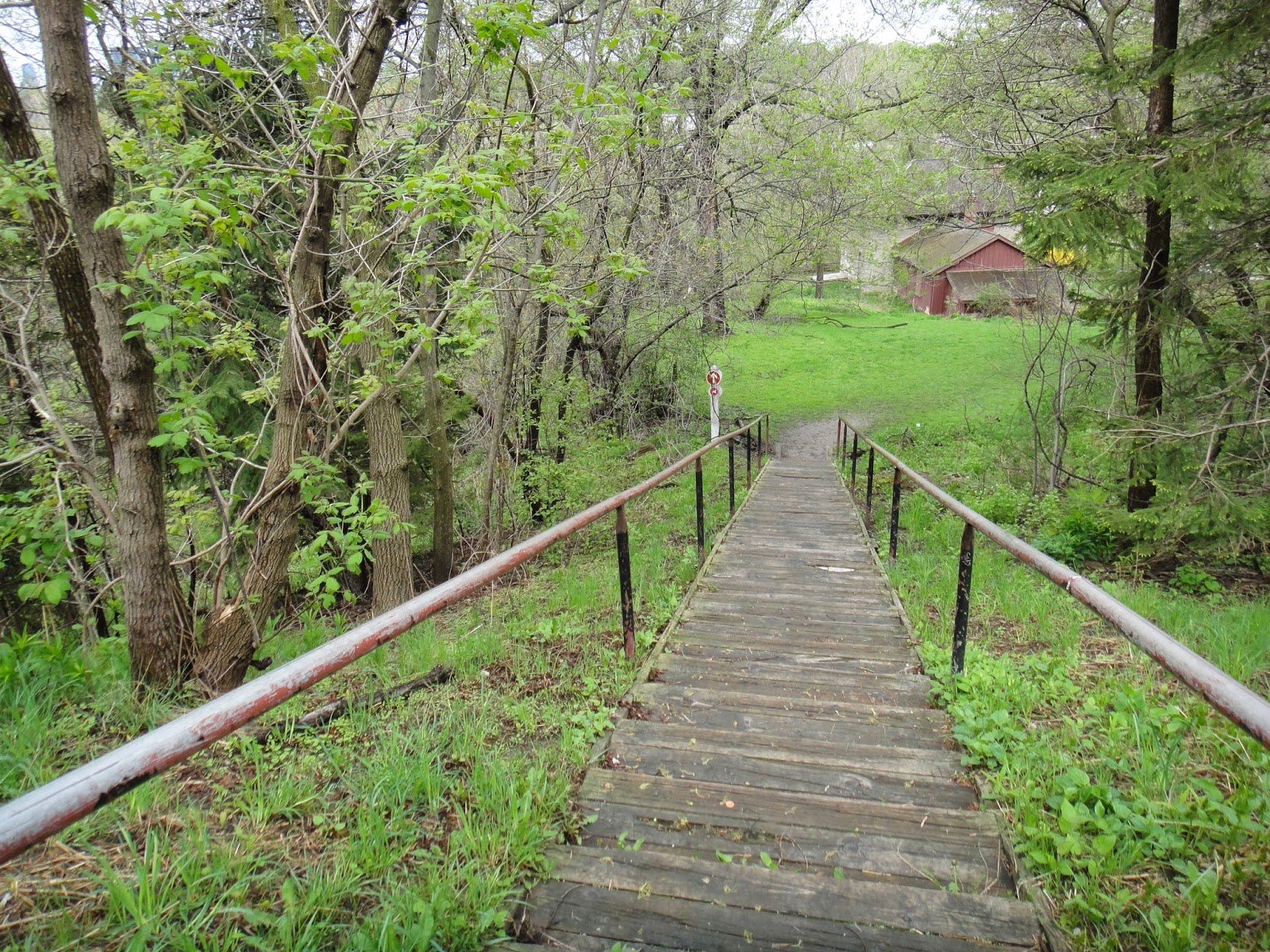 This year, I  decided to join the stewardship team at Todmorden Mills Wildflower Preserve. There has been a stewardship team at that site since the early 1990s. It is not part of the City stewardship program but some of the people involved are the same. This team has been working together for several years and they are very knowledgeable.

The site has been the subject of surveys by botanists and 11 rare species have been identified in the Preserve. These include a sedge, two trees (Red Cedar and Slippery Elm) and herbaceous plants, most of which live in wetland habitats. One, the Skunk Cabbage, is quite common at Todmorden Mills. It is one of the plants that come out first in the very early spring.

The site has a lot of invasive species that need to be removed like other sites in the Don Valley but because it has been maintained for a longer period by a team of stewards, it is in much better shape than other sites. There is also a number of planting events throughout the season with university students coming in and taking part in the events. 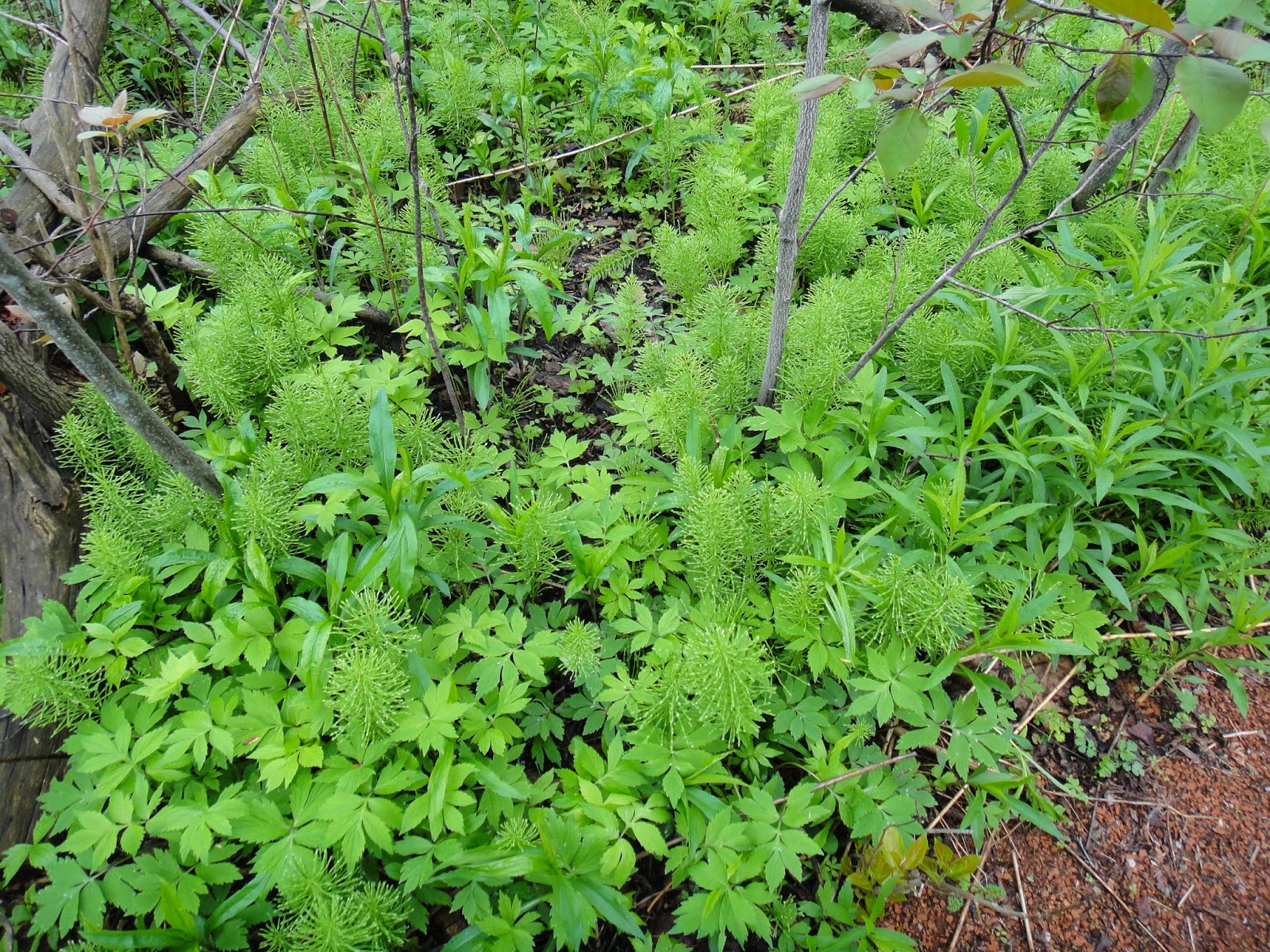 So far, this year, I have planted oak shrubs and cedar trees. 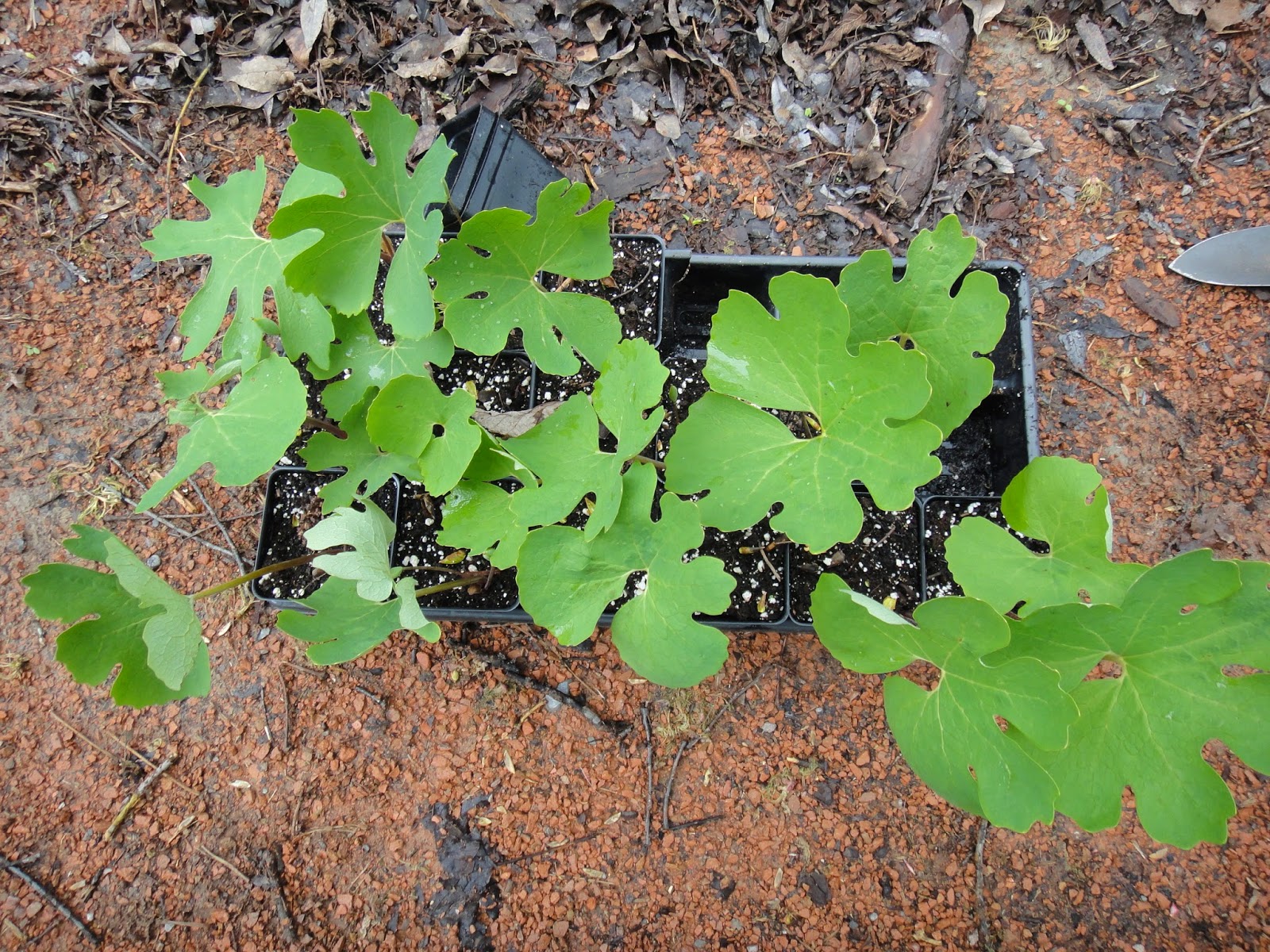 There are 2 ponds around the preserve providing great habitat for the wildlife. The water also prevents the site from becoming dried up.
Forest and woodland wildflowers include spring ephemerals such as Jack-in-the-pulpit and Skunk Cabbage, which have survived from the original forests, Others such as White Trillium, Bloodroot and Wild Columbines have been reintroduced and have established. Marsh and swamp wildflowers of note include Marsh Marigold, Turtlehead and Spotted Jewelweed. 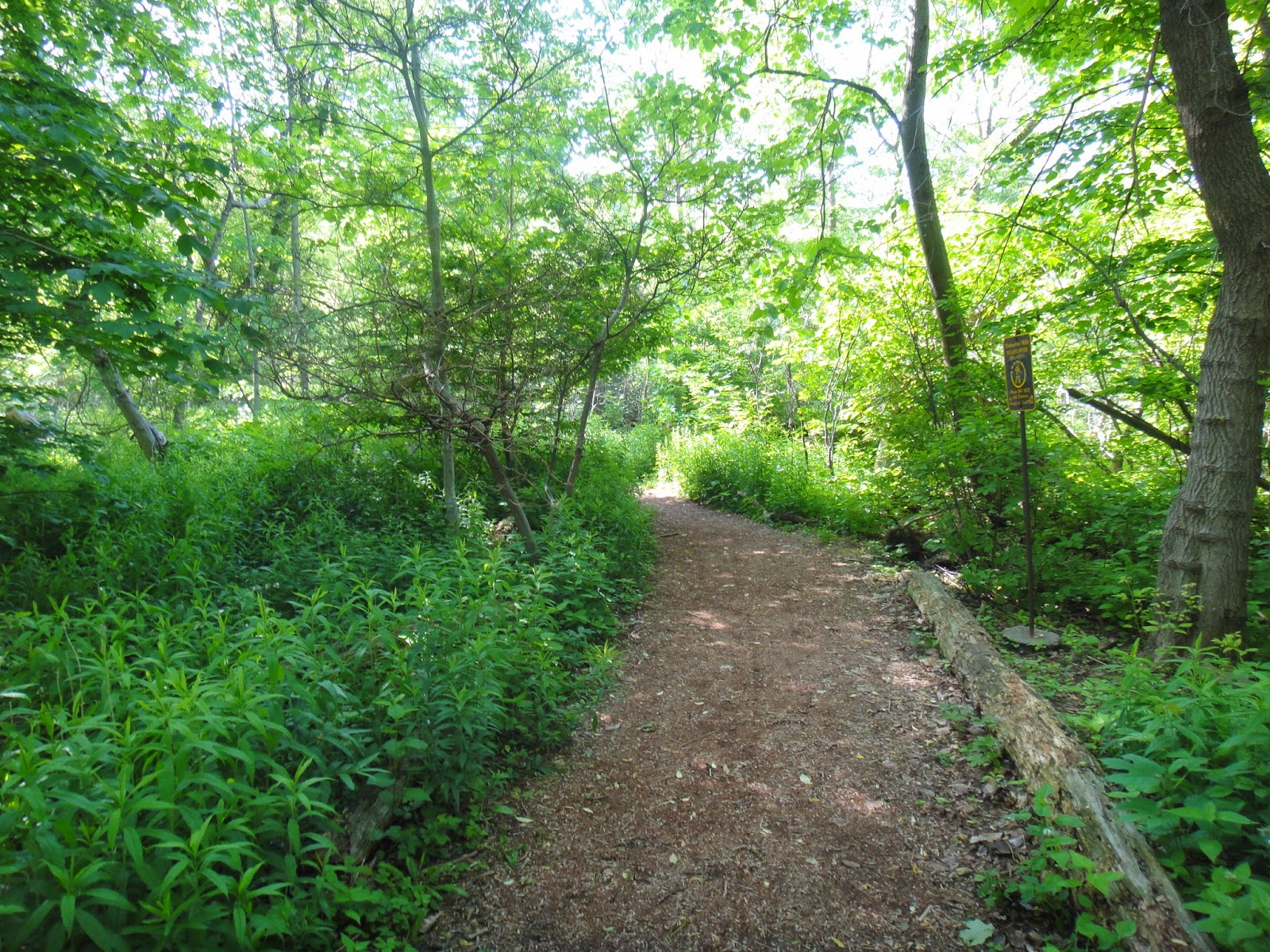 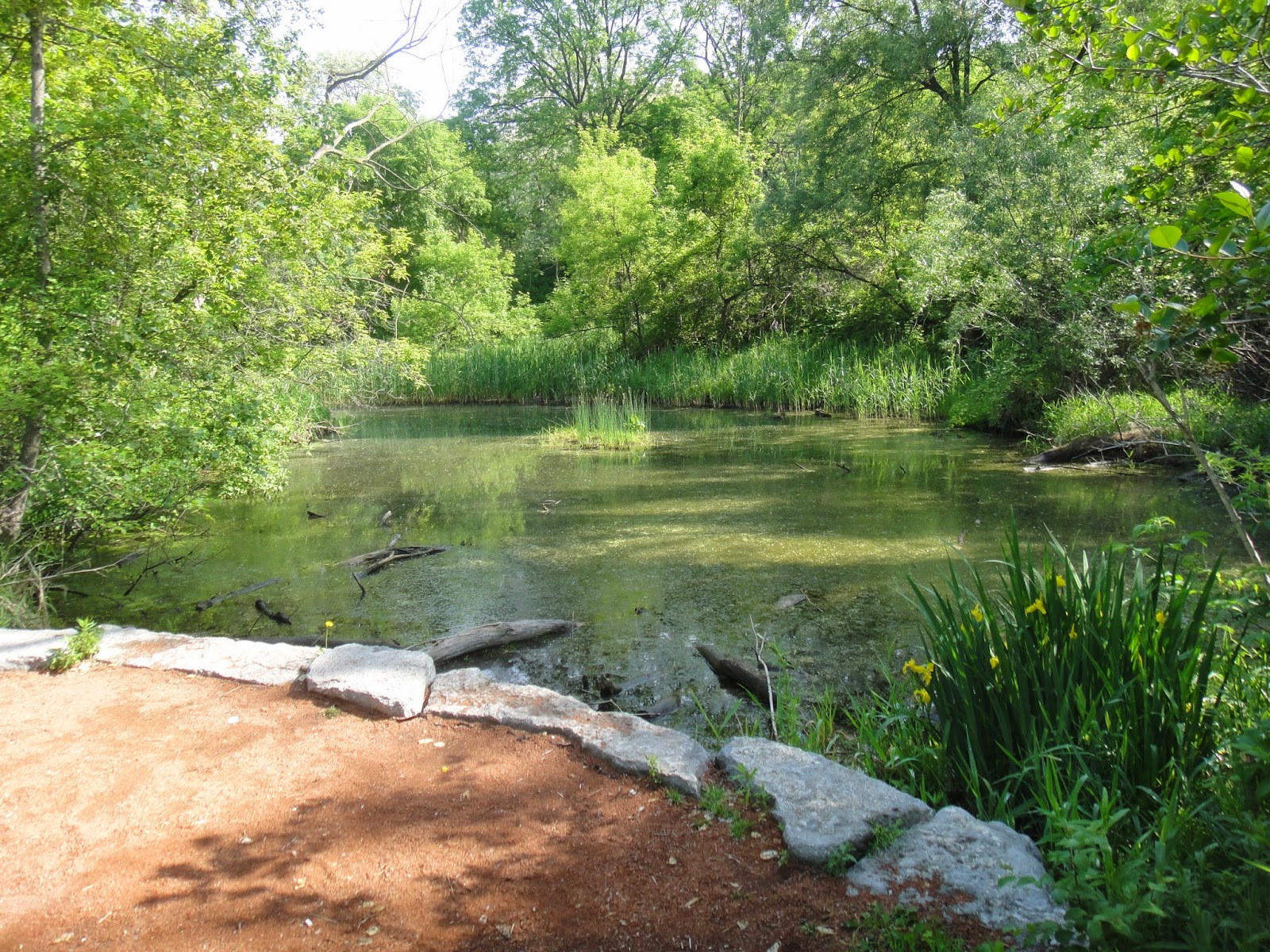 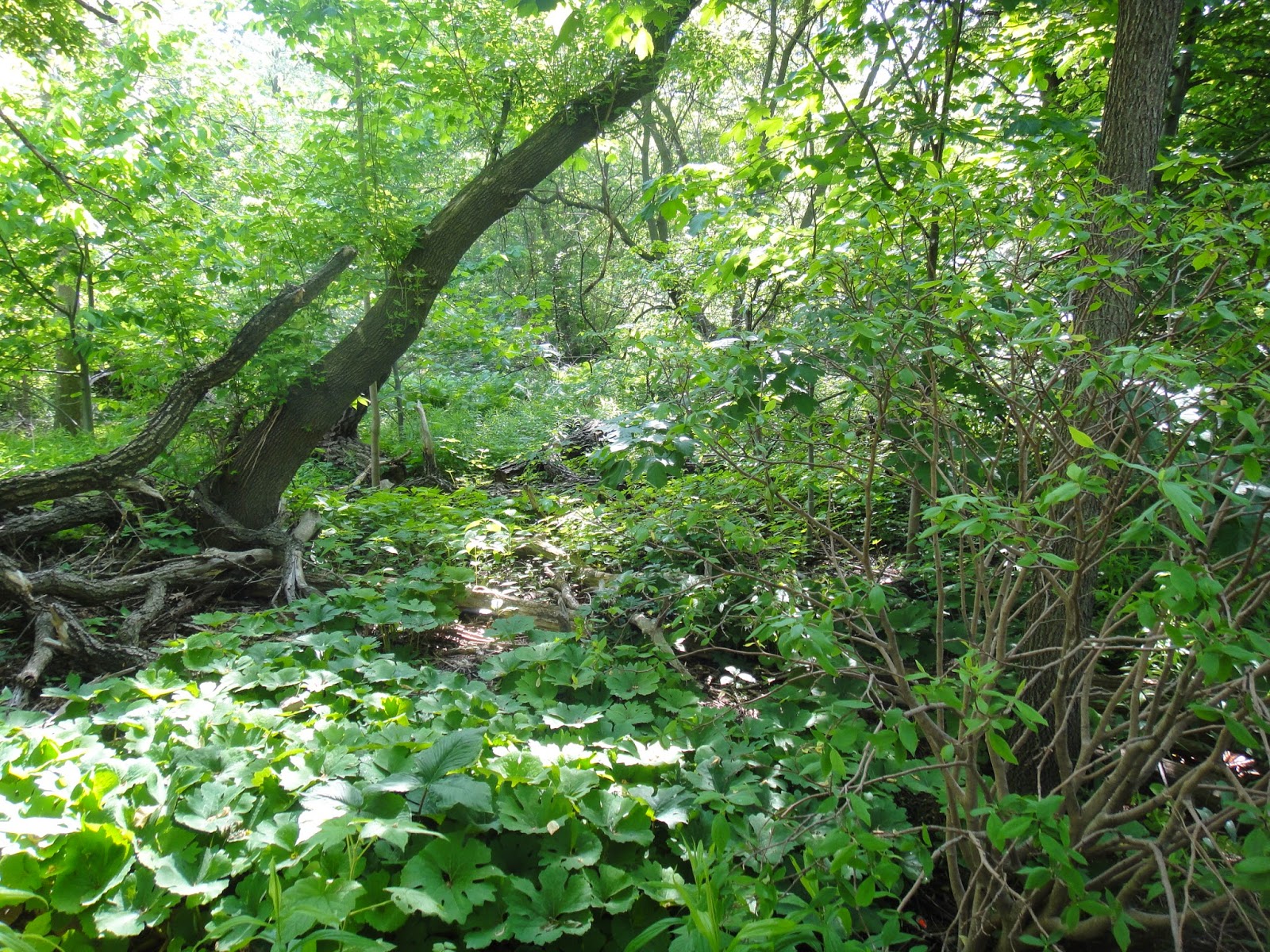 Today, November 2, we had a Fall event at The Brickworks. We met with stewards from the other sites to tackle phragmites around the back ponds of The Brickworks.  Phragmites, the common reed, is a large perennial grass found in wetlands throughout temperate and tropical regions of the world. It is highly invasive and causes damage to wetlands.  The team that normally works there didn't have the time to do this task before the end of the season. 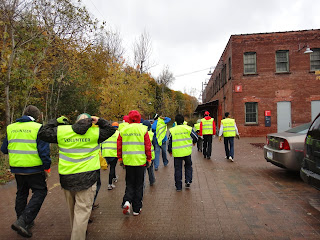 It was a rainy day but about 18 people showed up which is great. We had to wear these flashy volunteer vests as The Evergreen Brickworks get so busy on a Saturday morning with the farmers' market and other events that people might wonder what we're doing out there with clippers and other tools.  I guess we had to look official.  We don't want to scare anyone. 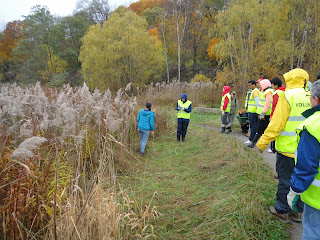 We got to the site and saw the amount of phragmites that needed to be removed. 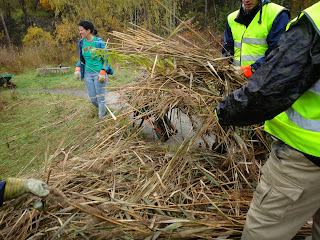 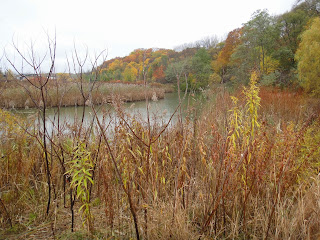 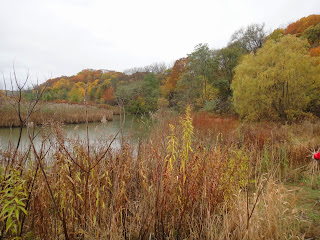 After pictures.  We can actually see the pond now after removing the phragmites. 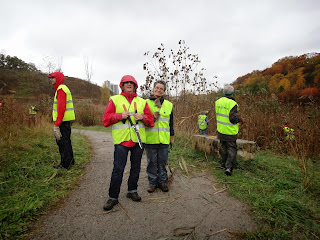 A few of the volunteers towards the end of the morning. Tired but happy to get the job done.

This is the first time we had an event so late in the season. Usually, the stewardship program ends at the beginning of September. But it sure was worth it and people were commenting that it would be nice to continue this in future years. But now, the season has wrapped up for good and we'll continue this work next Spring.

The site is very dry this week, we haven't had any rain for more than 2 weeks now.  We needed to clear up a lot of dead tree branches at the back of the site and we also did a lot of mulching to try to add moisture to the trees. 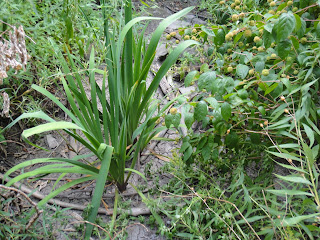 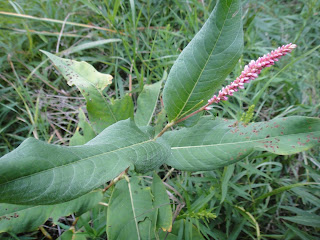 Back to Riverdale Farm

This week, we went back to Riverdale Farm to take care of some more invasives. Stinging nettle is pretty much one of the worst at this site. We also worked on Japanese Knotweed and Burdock. 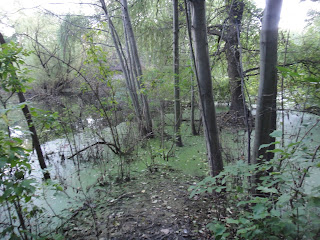